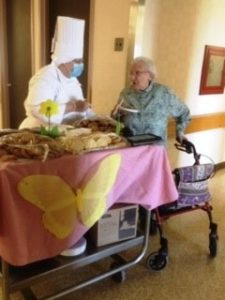 Although some of the initial publicity, concern, and restrictions of the Covid-19 pandemic have somewhat diminished, one reality remains, our Residents are still confined to their rooms. So one Little Sister decided to roll out a brand new idea–a Cookie Mobile!

For several days, day after day, mounds of butter, flour, sugar and an assortment of other ingredients were mixed, rolled, panned and baked. Soon the aroma of freshly baked cookies wafted throughout the home! Pan after pan emerged hot from the oven and were set to cool on the baker’s rack. Once cooled they were carefully stored. After repeating this well-choreographed routine over several days, we soon had dozens and dozens of Ranger, Double Chocolate, Chocolate Chip and Sugar cookies waiting and ready to munch on!

On the morning of Tuesday, May 5, a large, rather cumbersome kitchen cart underwent an amazing transformation! Draped with a dusty rose table cloth and given a touch of spring with the addition of a lavender butterfly on one side, a pastel yellow on the other, and a few artificial spring flowers, our cookie mobile came to life! 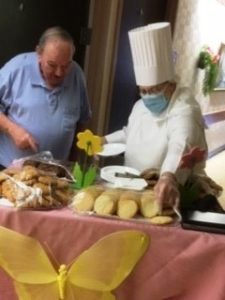 Once the decor was complete, the next step was to assemble the trays of cookies! Four large trays were filled with our cookie assortment–a large platter each of Ranger Cookies, Double Chocolate Chip, Sugar and Chocolate Chip–then arranged on the cookie mobile! Napkins and plates were collected from our donation bin and added to the cart, extra cookies stored on the bottom shelf in anticipation of the afternoon launch!

As the clock struck 3 p.m., our Little Sister donned a chef’s hat (gloves and mask understood), set the jingle from Mr. Softee, took the helm of the Cookie Mobile and we were on the roll, ready to share some cookies and hopefully bring some smiles! 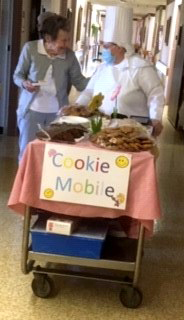 The Mister Softee jingle resounded throughout the hallways as the Cookie Mobile emerged from the elevator and made its way down the Fourth Floor hallway! The Residents, intrigued by the lively jingle, came to their doorways to investigate. They were surprised and delighted to find our Little Sister handing out cookies as the Cookie Mobile was not announced beforehand! Up and down the halls Sister and her cart continued to move, handing out cookies to each of the Residents!

Some carefully considered their choices while others were willing to take a gamble and would reply to her inquiry, “What would you like?” answering “One of each!” to which she replied by happily filling their plate with each variety! A few waited for seconds as she made her way back to the elevator. Repeating the process on the second and third floors, she watched as the smiles multiplied in number and a few laughed heartily at her attire! Employees she met along her route also were treated to cookies.

With the rounds of the house completed our Little Sister set out for the Pavilion next door. There, a few Residents had gathered in the community room, well distanced from one another, to recite the rosary. The smiles started to spread once again as the Cookie Mobile made its way to where they were gathered and eager Residents took their turns to peruse the tasty offerings before them and make their choices! Once everyone had their supply our Little Sister moved on going door to door with her Cookie Mobile! It took a full two hours to complete her rounds but the cookies on wheels seemed to be much appreciated as was witnessed by the smiles it engendered!

The Cookie Mobile has been stored away for the time being but in the hope that it will soon roll again! 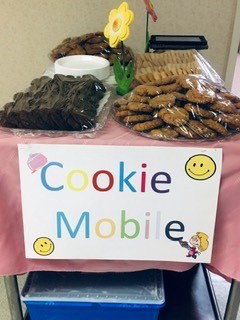